﻿﻿ Do Animals Get Cancer? | INSTITUTE OF BIOSCIENCE

“Do animals get cancer?”, “Why do animals get cancer?” and “How to treat cancer in animals?” are some of the questions I encounter often throughout my career. Cancer is not exclusive to humans. It affects most animal species, including dinosaurs, and is one of the leading causes of death in companion animals. There are many types of cancer in animals, but different species have a predilection for different cancers, such as skin and mammary cancers in dogs, lymphoma (malignancy of the lymphocytes) in cats, skin cancer in horses, uterine cancer in rabbits, and oral cancer in hedgehogs.

Cancer is a complex process prompted by the interaction of many factors. Over the past decades, there is considerable progress in understanding malignancies in humans, however, knowledge of many cancers in animals is remarkably limited. While it is clear that cancer develops as a result of genetic mutation, except for certain types of cancer, the exact cause of mutation in most animal cancers is still unknown. It has been noted that some breeds of domestic animals are more likely to develop certain types of cancer suggesting cancer development is attributable to hereditary and genetic factors. A prominent example is renal cystadenocarcinoma and nodular dermatofibrosis. It is an inherited cancer syndrome that causes skin, kidney and uterine cancer in German Shepherd dogs and Alsatians. Other examples include increased susceptibility to histiocytic sarcoma (malignancy of a type of white blood cell) in Bernese Mountain dogs and Flat-Coated Retrievers (Figure 1), and ocular squamous cell carcinoma (cancer of the eye) in Haflinger and Belgian horses. Although many reports imply the association between genetic characteristics and cancer, it should be noted that not all cancers are heritable. 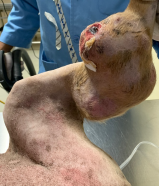 Figure 1. Histiocytic sarcoma at the left hind limb of a Golden Retriever.

Various environmental factors have been linked to cancer in animals. Studies have shown that second-hand smoke increases the risk of not only lung cancer in humans but also lymphoma in cats and nasal cancer in long-nosed dogs. Meanwhile, long exposure to ultraviolet irradiation is an undisputable cause of skin cancer (squamous cell carcinoma) in white and light-coloured cats (Figures 2A and 2B). Other carcinogens that have been described include various pesticides, herbicides, insecticides, asbestos, radiation and hormonal contraceptive. 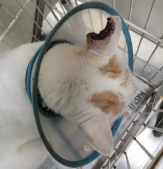 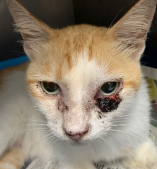 Figure 2. Squamous cell carcinoma at the (A) ear pinna and (B) lower eyelid of two cats.

Some viruses are known to cause or increase the susceptibility of infected individuals to certain cancers. For example, cattle that are infected with bovine leukaemia virus are more likely to develop leukaemia or lymphoma, while feline leukaemia virus causes lymphoid cancer in 20% of persistently infected cats. Virus can also cause benign growth
(papilloma) in dogs, cattle and rabbits. Cancers in humans generally cannot be transmitted between individuals, but some cancers in the dog (transmissible venereal tumour) (Figure 3) and Tasmanian devil (Devil facial tumour disease) are known to be contagious. To date, there is no evidence that these cancers are zoonotic (spread from animals to people).

Figure 3. Transmissible venereal tumour at the prepuce of a dog.

What are the treatments?

Diagnosis of cancer is not a death sentence. Some cancers are treatable especially when addressed early. The field of veterinary oncology has progressed considerably over the past decades and much attention has been focused on dogs and cats. The treatment options available are surgery, chemotherapy, radiation therapy, targeted therapy and immunotherapy. Cancer type and stage (extent of the cancer) determine whether a patient receives one or combination of treatments. Detecting and treating cancer at an early stage offer the best chance for successful treatment and allow simpler therapy, while advanced stage at diagnosis renders treatment to be more challenging and less rewarding. On the other hand, cancer management in production animals may be different. Cancer is infrequently diagnosed in these animals as they are less likely to live to old age. Production animals with cancer are usually culled.

Can cancer be prevented?

Cancers of the uterus, ovary and testicle can be prevented by neutering the animals (removing the reproductive organs in both male and female). This is especially important in rabbits, where the incidence of uterine cancer has been reported to be as high as 80%. Neutering female dogs and cats at an early age also reduces the risk of mammary gland cancer development. Studies have shown that neutering before the first heat cycle provides the best protective effect against this cancer. Transmissible venereal tumour is another preventable cancer. As this tumour usually spreads via coitus, keeping dogs from roaming can prevent them from contracting this disease. Many other cancers are not preventable, but the risk of developing certain cancers with known risk factors can be reduced. For example, by reducing exposure to sunlight and environmental tobacco smoke.

Although there have been great advances in understanding veterinary oncology, there is still much to learn about cancers in different animal species. It might take years or decades for scientists to address the unanswered questions in animal cancer.

Acknowledgements
The author would like to acknowledge Dr Azlan Che Amat and Dr Kok Mun Keong for their useful suggestions.

About the author
Dr Ong Siew Mei is a senior lecturer at the Department of Companion Animal Medicine and Surgery, Faculty of Veterinary Medicine, Universiti Putra Malaysia. She’s also a veterinary surgeon at the University Veterinary Hospital. Her research focuses on cancers in dogs and cats. The author can be reached at siewmei@upm.edu.my.

What is a Microbial Culture Collection?

STIMULATING KULAI CHILIES CULTIVATION AT THE INSTITUTE OF BIOSCIENCE