Aquaculture, also known as aquafarming, is the farming of fishes, crustaceans, mollusks, aquatic plants, and other organisms. Aquaculture relates cultivating freshwater and marine water organisms under-regulated environment and can be contrasted with commercial fishing, which is the harvesting of wild fish (Link et al., 2015). The global aquaculture production represents 114.5 million tons, with an approximately estimated value of USD 263.6 billion in 2018 (FAO, 2020). Not only that, aquaculture has contributed a significant factor in developing food securities, promoting nutritional standards, and relieving poverty in some poor countries (Béné et al., 2016; FAO, 2016; Shamshak et al., 2019). The most interesting finding was documented that more than 89% of the world's aquaculture generation was contributed from Asia (Shamshak et al., 2019)

The growth of aquaculture has, unfortunately, also been accompanied by some challenges. Fish diseases in intensive cultivation areas are a major problem and have an impact on environmental and ethical issues besides reducing economic productivity. For example, aquaculture farms in Malaysia and other neighbouring tropical countries have experienced vibriosis in important food fish species, resulting in decreased protein sources for human consumption and reduced household income and farm revenues (Albert & Ransangan, 2013) (Figure 1). Diseases are commonly prevented and treated by improving the immune capacity by either vaccination or antibacterial drugs. The use of antibacterial agents has been shown to introduce resistant pathogenic strains and persistent harmful chemical residues in fish and the environment. A vaccine with broad coverage against multiple fish disease would give a high impact on the aquaculture industry, whereby a fish rearing system can be developed practically manage by inexperienced citizens. The system can be developed by providing high immunity juvenile, fries, and fingerlings or the application more on supplying fish feed incorporated with vaccines.

In the rapidly expanding activities of aquaculture, advancement in fish husbandry technologies is of utmost importance for producing high-quality fish and sustainable productivity, where the critical aspects are fish health management and disease prevention. Fish diseases in intensive cultivation areas are a major problem and have an impact on environmental and ethical issues besides reducing economic productivity. Diseases are commonly prevented and treated by improving the immune capacity by either vaccination or antibacterial drugs. The use of antibacterial agents has been shown to introduce resistant pathogenic strains and persistent harmful chemical residues in fish and the environment. A vaccine with broad coverage against multiple fish disease would give a high impact on the aquaculture industry, whereby a fish rearing system can be developed practically manage by inexperienced citizens. The system can be developed by providing high immunity juvenile, fries, and fingerlings or the application more on supplying fish feed incorporated with vaccines. 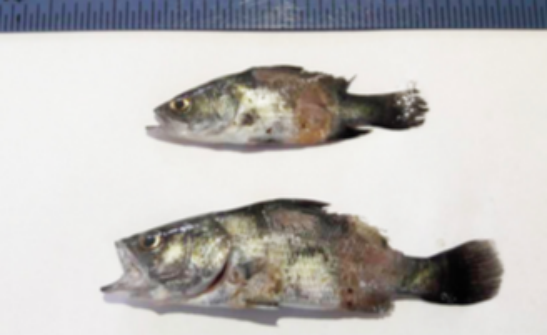 What is Aquaculture Health Management?

Aquaculture health management is a term to describe practises designed to prevent fish diseases and promote good well-being in fishes. The success of health management starts with prevention preferably than treatment. Prevention of fish disease can be achieved by good water quality management, optimum fish number, nutrition, cleanliness practises, and usage of vaccines and other immunostimulants. Thus, are the base for preventing the outbreak from opportunistic diseases.  Opportunistic diseases caused by bacteria, fungi and parasites that constantly surrounded fish in the same water containment. Poor water quality, poor nutrition and lower immunity in fish usually relate to the stressful condition that permits opportunistic pathogens to take advantage of the adverse condition and caused diseases.

Use of antibiotic in aquaculture and disease management

The main problem faced in the aquaculture industry is the infection of diseases that cause a lot of losses, affect aquaculture production and the economic development of some countries.

To control the spread of disease and promote animal growth in aquaculture, antibiotics are often used as an antibiotic- medicated food as feed to infected fish (Pridgeon & Klesius, 2012) via the oral route to the fishes that share in same tanks or cages (Defoirdt et al., 2007), administered in water immersion or by injection. However, the use of antibiotics can cause some pathogens to form antimicrobial resistance due to uncontrolled use of antibiotics in aquaculture. Besides, the use of antibiotics in aquaculture products leaves residual antibiotics that can cause toxicity and allergies to humans when consuming the contaminated product.   Another adverse effect includes carcinogenicity, mutagenicity, teratogenicity, bone marrow suppression, and destruction of normal intestinal flora (Liu et al., 2017). Antibiotics should be used appropriately with the right dosage and control under veterinary supervision. Safety levels of antimicrobial residues in aquaculture products should be screened and monitored.

A study noted wide variations in antibiotics use between countries; from as low as 1 g of antimicrobials per metric ton of aquaculture products in Norway to as high as 700 g antibiotics used in Vietnam per metric ton of fish produced (Defoirdt et al., 2011). Although levels of antimicrobials used in fish farms differ significantly between countries, current levels are staggering. For example, in 1994, approximately 500-600 metric tons of antibiotics was estimated to have been used for shrimp production in Thailand. The scale of antibiotics uses in many fish farms have been characterised by experts as excessive. In aquaculture, fish consume antibiotics mixed in feed, even though most of it is not effectively metabolized and the vast majority ends up excreted into the environment.  One report estimated that fish excretes 75% of antibiotics consumed into the culture water (Burridge et al., 2010). Consequently, the non-therapeutic use of antibiotics has featured among the list of contributors that help propagate multidrug-resistant strains of bacteria (Romero-Sanchez et al., 2014), which made Sweden in 1986, followed by the European Union (EU) to ban >70% antimicrobials used in animal husbandry (Castanon, 2007). Currently, research exploration is focused on alternatives to antibiotics in aquaculture, to combat this unsustainable trend. Thus, antibiotics should be used appropriately with the right dosage and control under veterinary supervision. Safety levels of antimicrobial residues in aquaculture products should be screened and monitored. Alternative methods without the use of antibiotics to treat disease infections in the aquaculture such as a vaccine or probiotic are needed for the sustainability of the aquaculture industry and food safety.

First prevention factor to be monitor in aquaculture fish farm is the water quality parameters that include temperature, dissolved oxygen, hardness, pH, alkalinity, ammonia and nitrites. Optimal water quality is differed by cultured fish species and crucial to be observed to ensure growth and survival. Good water quality management includes the establishment of standard water quality testing protocol with tolerance associated with the cultured species. Another important health management factor is the fish stocking density in a containment area. The fish number associated with fish size, behaviour and containment size. The number should be optimal as this would also influence the water quality, fish growth, fish immunity and feed consumption.

Nutrition is one of the criteria to be optimised in aquaculture, crucial for fish health, growth and reproduction. Review on balance fish nutrition in a sustainable manner by Hixson (2014) had discussed in detail about the quality of nutrition efficiency, biotechnology improvement and scenario of overfeeding. Cumulative of feed waste on a farm definitely will influence water quality and affect fish well-being. Next important health management criteria are sanitation practise that includes new batch fishes quarantine, disinfection measure between the fish group, cleanliness practise during fish growing and prevention of fish disease spreads by tools, workers or water (Francis-Floyd). Sanitation action varies depends on the fish containment types, such as a pond, tanks or recirculation systems. The sanitation techniques applied include draining, drying and usage of chemicals agent or ultraviolet light.

Use of Immunostimulant for Disease Prevention

Even though all discuss measured already taken care off, there are still slight possibilities of disease outbreak in the fish farm that unavoidable. For these reasons, researches had been navigating to manipulate fish immunity. The manipulation focus on immunity stimulant by using probiotics, prebiotics and vaccines. Probiotics are live microbes in specific amount administered for assisting digestion and modulate immune systems against pathogens (Balcázar & Ma, 2007). The adequate amounts of probiotics use to modify gut microflora, secretes antibacterial substances and prevent adhesions of pathogens. In addition, the probiotics also secrete digestive enzyme lead to improve the digestion process and promoting fish growth. The same intention and benefits were also provided by the usage of prebiotics, a compound or substances incorporated in fish feeds. Many success formulations and evidence for specific fish species were documented including their mode of action (Akhter et al., 2015; Carbone & Faggio, 2016; Dawood & Koshio, 2016; Hoseinifar et al., 2016). Lactic acid bacteria such as Lactobacillus sp. and Bacillus sp. are widely used as probiotics in aquaculture.

As part of immunostimulant, vaccines play significant roles in improving fish health management. Different from probiotics and prebiotics, vaccines designed from part or whole pathogens to be against specific diseases. Vaccine model of action target-specific immunity in fishes by the prior introduction of pathogens particles. Fish immunity would recognize the pathogens and manage to produce specific immunity and confer protection against the disease (Bakopoulos et al., 2018; Laith et al., 2019). The usage of vaccines more widely in large and advance aquaculture farms as the administration were more complicated compare to probiotics and prebiotics. Currently, some researches combine administration of multiple types of immunostimulants to get wider protection with significant growth enhancements (El-Shall et al., 2020; Soltani et al., 2019).

Currently, not many commercial vaccines available because of the efficacy and problem related to the mass production of antigen. Usually vaccine delivery in fish is through oral vaccination with antigen included in the feed. These antigens act as stimulation of effective immune response locally and systematically and can reach the sites where induction of immune system occur without being degraded. Efficacy of oral vaccine depends on the formulation, dosage and nature of the antigens. Formulation of the oral vaccine should consider the protection of antigens from degradation in the gut. The problem with the vaccine when administering orally, that there is very difficult to determine the dose at an individual level. The average intake in the population can be determined when examining of feed residues and weight gain at population level after feeding. Distribution of antigens per weight unit of feed or pellet is hard to determine (Mutoloki et al., 2015). The inactivated vaccine provides a shorter length of protection than live vaccines and needs boosters to build long-term immunity. There are many progressing techniques in vaccine development such as usage of encapsulation technique to improve efficiency and harmless application while strengthening the effect of nano- or microparticle vaccines. Encapsulation of particles make doses of medication smaller, can targeted to specific tissue and prevent or decrease the toxic and secondary effects of the drug, increase the efficiency of drug delivery and become less expensive (Toyokawa et al., 2008). One of the encapsulation techniques is encapsulated with alginate which is a copolymer of β-D- mannuronic acid (M) and α-L-guluronic acid (G) produced by brown algae. There was a report that the administration of feed containing alginate enhanced innate immunity in brown marbled grouper and increase resistance from V. alginolyticus infection (Cheng et al., 2008).

Aquaculture health management is about preventing disease outbreak with practises and administration of immunostimulants. Good animal husbandry practices and health management should be emphasized to prevent infectious disease in aquaculture. Usage of vaccine, probiotic or other therapeutic properties that are environmentally friendly and safe should be practised as an alternative to replacing the use of antibiotics and other chemical treatments that are harmful to the environment and humans. The practises includes daily basis observation would allow early detection of problems and avoid mass disease outbreak. The diseases are responsible for limiting socioeconomic development warrants cutting edge research approaches that would result in new tools or strategies for diagnosis, prevention, amelioration, and/or treatment of diseases.

FAO. (2016). The state of food and agriculture. Food and Agriculture Organization of the United Nations.

FAO. (2020). The state of world fisheries and aquaculture 2020. Sustainability in action. Food and Agriculture Organization of the United Nations.

Hixson, S. M. (2014). Fish nutrition and current issues in aquaculture: the balance in providing safe and nutritious seafood, in an environmentally sustainable manner. Journal of Aquaculture Research and Development, 5(3).

STIMULATING KULAI CHILIES CULTIVATION AT THE INSTITUTE OF BIOSCIENCE